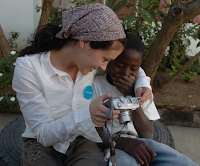 What social causes are most important to you?
Gender equality, education, child protection and survival, global health and animal rights.
What charities do you support and how?
I support UNICEF, The Global Network for Neglected Tropical Diseases, PETA, Best Friends Animal Society, Make-A-Wish Foundation, and the Environmental Media Association. I support them by using my voice to empower and educate in whatever way I can.
Is there a personal tie?
All the charities I support mean something to me personally. What they stand for has touched my heart in one-way or another.

Is there a particular way you would want readers to be involved?
I think the most important thing for readers to remember is that one person can truly make a difference. I would encourage readers to open their hearts to the struggles of humanity, educate themselves, and look for opportunities in lending a hand that are personally relevant.

A really great way for people to get involved right now is to becoming a great project that UNICEF is doing with the Association of College Unions International (ACUI) and The George Harrison Fund for UNICEF on college campuses around the nation. The challenge - called “Help Us Save Some Lives” - runs from September 5, 2008 to February 28, 2009 and encourages students to make a difference by raising awareness and funds to save children around the world. I think it’s a great way for people to get involved and change the world.

What countries have you visited as an Ambassador? Is there one encounter that had a strong impact?
I have traveled to Angola and India as a UNICEF Ambassador. In Angola, there was one moment that I will never forget. I was walking through an active minefield with The Halo Trust, on the small path that was deemed “safe” and marked by small stakes in the ground. This tiny pathway was just inches away from the area deemed “unsafe” and I could hear children laughing and playing. They were so close by. Imagine if your child’s playground was only yards away from a landmine. No weapon should outlast a war. In Angola there is one landmine for every child. I went to India six months after the tsunami. I toured villages that were devastated by the tsunami. I was so inspired by the utter hope these people had. I realized that the human spirit has the great capacity to prevail.

Do you have any tattoos that relate to you charitable work?
I have 8 tattoos and although none of them specifically relate to my philanthropic work they all serve as spiritual reminders of the importance in counting my blessings and recognizing what is important in life.