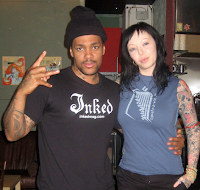 What is your job?
I am an author, activist, artist, and motivational speaker.
What social causes are most important to you?
The primary cause for me is promoting holistic health and wellness on all levels of being from the personal physical/mental level to the overall health and wellness of our neighborhoods by helping to cease gang violence by organizing them around community issues.

What charities do you support – and how?
I support several causes and initiatives whether it be through my direct community organizing with my own organization Unify the Hood, Heal the Hood or by performing at benefits for numerous other organizations that promote social justice and wellness. I do not limit myself to just one or a couple of charities or organizations because there are so many problems plaguing our communities and so many great organizations combating them in different but all necessary ways.
Why do you have a passion for this one in particular, is there a personal tie?
My organization Unify the Hood Heal the Hood is very dear to me because it has worked directly with hundreds of street tribe members from various street organizations to unify and organize around community issues while most people only spend time criticizing and outcasting this population of our young people who are actually full of leadership skills and zealousness. Everyone wants to stop the “gang problem” but very few want to engage these young people to explore what their positive attributes are or even to research and learn about the positive political foundations of many of these street tribes. Unify the Hood Heal the Hood taps in on all these levels: the historical, the political, the cultural, and also provides artistic outlets through open mics.
Is there a particular way you would want to encourage readers to be involved?
I could give a list of ways that people could do specific things but my cause may not be their cause. There may be another pressing issue that is affecting their community and needs to be addressed immediately so instead I strongly urge people to start doing something about the things that affect them, their community, and those around them. The next time they find themselves shaking their head about something they read or hear about I want them to do something about it and don’t make it a one time thing or just be concerned while it is in the news. I want them to check back on that thing and do something when that issue is no longer in the news. Basically I’m urging people to create the change they want to see in the world.
Have you done a song about this topic, or dedicated a song to a charity?
All of my music promotes my beliefs but two songs in particular would be “Purify or Die” which talks about the diseases that are killing the African American and Latino communities at alarming rates and the need to take charge of your life and make a change to heal yourself. The second song would be “G’s Up Salute” with Jadakiss and The Game which promotes the Unify the Hood Heal the Hood mission.
How would you define social responsibility?
Real simple: Each one Teach one. Everyone’s voice has the ability to shape and mold the world in and around us. It is our responsibility to activate and apply this voice to our everyday actions. Sitting around critiquing the problems of the world or complaining about them won’t do anything so we must be aware of the social issues around us and actively work to improve them. We all have a role and part to play in our society.
Do you have any tattoos that relate to your social work?
I have over 500 tattoos and every single one of my tattoos relates to my cause and mission in a very direct and concrete way. My tattoos have been incurred over the past 13 years and I have just about fully covered my entire upper body and plan on soon moving to my lower extremities because my whole body will be a pillar of empowerment and prayers and ultimately that is what I am bringing to the world.
I have a profound respect for my ancestry and feel like I have a duty to keep my cultures so most of my tattoos are cultural either Native American based and Nubian Kushite based. I have other tattoos that correlate more to the street tribe culture; I have United Brothers and Families Alliances, which represents the alliances and truces that were set by various CRIP and BLOODS sets across the nation to stop the violence and promote unity and community healing. I also have Umoja, the Swahili word for Unity, next to it La Raza to signify the Black and Brown unity, which Unify the Hood Heal the Hood promotes.
Also in honor of the of Unify the Hood Heal the Hood mission I have B’s Up C’s Up G’s Up which refers to respecting and honoring all, Black Power Gangsta represents using your street knowledge for the betterment and elevation of the people by tapping into the inner power and positive collective power.
Quick list of tattoos/mention artists if you’d like:
Yoni at New York Adorned did all of the hieroglyphs on my back. I have over 420 stars representing my name and being Supa Nova, the Lord of Stars shining like a hundred billion stars that were done at numerous places Sunset Strip in LA, New York Adorned, and Fantasy Tattoo in NY. I have almost 25 portraits of Indigenous and Kemetic deities and a three-part portrait of Chaka Khan which represents the celestial mother, the sun rise, midday, and sunset. Most of those were done at New York Adorned with Noni, Virginia, and Stephanie. Mad Dog at Dragon Tattoo in NY did a few of my other tatts and everything else on me was done at various places between LA and New York.
Posted by heidiminx at 7:03 PM

Email ThisBlogThis!Share to TwitterShare to FacebookShare to Pinterest
Labels: Hip Hop Medicine Man, Inked For A Cause, Supa Nova Slom, Unify the Hood Heal the Hood