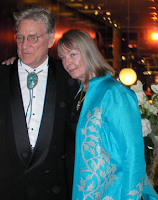 Name: Bob “Tenzin” Thurman and Nena Thurman
What are your jobs?
(Bob)I’m a professor of Buddhist Studies at Columbia University; I’m also responsible Tibet House US ( a nonprofit dedicated to Tibetan culture), and for the American Institute of Buddhist Studies, (which translates the treasures of Tibetan scientific literature into English and other languages.) I’m also a writer and a public lecturer.
(Nena) I am the Managing Director of Tibet House US, with special focus on building Tibet House’s  Menla Healing Center in Catskills, where Tibetan healers and physicians can help people with their health and mental equilibrium.

What social causes are most important to you?
(Bob) Preserving the environment, helping those whose human rights are violated, overcoming the widening gap between rich and poor worldwide, and strengthening education everywhere at all levels.
(Nena) Pretty much the same, perhaps extra emphasis on animal rights.
What charities do you support – and how?
Tibet House US and number of other Tibet related charities. Amnesty International, Medecins Sans Frontieres, Oxfam, Humane Society, Oglala Lakota College, and Greenpeace.
Why do you have a passion for Tibet in particular, is there a personal tie?
I am fifty year friend of HH Dalai Lama, and have been living with and studying Tibetans, religion, philosophy, psychology, history, and culture for that time. They are under genocidal threat from Peoples’ Republic of China, and I have picked them to focus on, though I also wish I could help everyone as well and do what little I can.
My wife has pretty much the same history and passion, as do some of our children.
Is there a particular way you would want to encourage readers to be involved?
We have a number of benefits throughout the year, and on March 3rd we are holding our 21st Annual Benefit Concert at Carnegie Hall in New York City. The concert’s artistic director, Philip Glass, has put together an incredible line-up of musicians including The Roots, The Flaming Lips, Patti Smith, Michael Stipe, Angelique Kidjo, Taj Mahal and James McCartney. Tickets can be purchased through the Carnegie Hall Box Office. You can also consider becoming a member of Tibet House US  and help us succeed in this huge undertaking.
How would you define social responsibility?
It’s just human responsibility, being responsible for one’s actions and inactions and their effects on others. Saying “social” in front of “responsibility” is particularly apt in the language describing corporate behavior and misbehavior, and is used to encourage the leaders and owners of powerful corporations to look beyond their bottom line of profit and be accountable for the damage they might do to the environment, to animals, and to future generations, including their own children and grandchildren etc.
Do you have any tattoos that relate to your social/charitable beliefs/work?
I have a tattoo depicting the Jewel in the Lotus, from the Tibetan mantra OM MANI PADME HUM that relates to Lokeshvara, bodhisattva of supreme compassion, and expresses the union of wisdom and compassion – with my wife’s name written under it. I suppose this relates my devotion to Tibet and its highest ideals to my personal life.
My wife has something similar on her ankle, with a T on it, which could refer to mynickname “Tenzin,” or to the Buddhist goddess Tara, or even to Tibet itself. Phil from Boulder Colorado did both tattoos and he is a great artist.
Posted by heidiminx at 1:11 PM