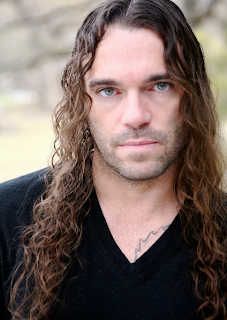 What is your job? Full-time novelist

What social causes are most important to you? Preservation of our natural environment, fundamental human rights, health.

What charities do you support – and how? My wife and I currently support Save-A-Pet which is a local, no-kill shelter that promotes the humane treatment of animals and we also give to a local charity called Pioneer Center, which provides direct services to more than 2,500 individuals who are in need—including: the homeless, youth in need, disabled people, sexual assault victims and more. How do we help? We help by donating six-figures annually to these respective charities.

Read more »
Posted by heidiminx at 9:26 PM No comments:

Email ThisBlogThis!Share to TwitterShare to FacebookShare to Pinterest
Labels: Built On Respect, Inked For A Cause, Inked Magazine, Jeremy Wagner, Pioneer Center, Save-a-Pet

Pasang Dorjee was arrested in 1993 and placed in a forced labor camp near Chengdu. A monk at that time, he hung up Tibetan flags, and handed out pamphlets, calling for China to leave Tibet, for the release of political prisoners and the release of the Panchen Lama.

In 1996, after the Chinese abducted the 11th Panchen Lama, the government appointed their own ‘fake lama.’ In attempt to consecrate this, the Chinese government wanted to pay to host a ceremony for their puppet lama at Kardze Monastery. Dorjee was arrested on April 2, 1996 for putting up posters in the monastery saying they did not want Chinese money.

Dorjee has his tattoo done while in prison in Mong County in Ngaba Prefecture. It originally read ‘Bhod Rangzen’ or Independence for Tibet – he did it to show his dedication to Tibet, and the Dalai Lama. It was done using a needle wrapped in thread, soaked in the ink used to print Lung Ta (prayer flags). Other prisoners told him that if the senior guards caught him doing the tattoo, he would face large problems including torture and an extended sentence. When the guards ultimately saw the tattoo, they asked its meaning (they couldn’t read Tibetan), Dorjee replied it was the name of someone he loved. Dorjee says there were lots of prisoners with tattoos, often the guards find tattooed people intimidating, but this was not his aim.

After Dorjee was released on April 1, 2002, he was constantly under surveillance, could not attend social activities, and had to report to the police station weekly. This made life almost impossible, and he saw escape to India as his only option.

In October, he escaped to Lhasa, but was detained in Shigatse for five days. When the police searched him, they found hi prison release papers, and returned him to his hometown of Kardze; he was imprisoned again for seven months, and given a fine of 40,000 yuan ($5,900). During this sentence, the police would strip him, and pour water over him in the winter. He made ink from a burnt candlewick, and over the course of several days, used a needle and thread to add several letters into is tattoo, changing the meaning to ‘fighter for the land of the snows.’
Upon his release, he learned his father had died, and spent a year at home with his family. During that year, he was detained again on a false accusation, and deprived of sleep for six straight days during the interrogation.
Dorjee escaped again, he made it to Lhasa, and then to Nari, but in Nari he fell seriously ill. He went to a doctor, who saw his tattoo and reported him to local police. The local police again could not read Tibetan, and he was released after one day. Dorjee finally reach Dharamsala, India in December 2005, after a month-long walk over the Himalayas.
Today, he says he wants to thank those who recognize that Tibet is not, nor has it ever been, a part of China, and those who continue to fight for Tibet’s independence.

Posted by heidiminx at 4:17 PM No comments:

Email ThisBlogThis!Share to TwitterShare to FacebookShare to Pinterest
Labels: Built On Respect, Inked For A Cause
Newer Posts Older Posts Home
Subscribe to: Posts (Atom)