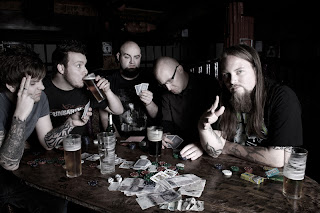 Name: Dale Butler
What is your job?
I'm the singer of British metal band Malefice
What charity do you support – and how?
PETA, we've had these guys down at our London shows in the past and let them set up a stand next to our merch to increase awareness in the metal community!

Why do you have a passion for this one in particular, is there a personal tie?
I'm a meat eater, but I can’t stand cruelty to animals in any form. I understand that some animals are bred to be killed, but some of the conditions they are forced to live in is sickening. I also completely disagree with killing for fur, ivory and generally poaching. If you think this kind of stuff is ok, I'll come round your house shoot your mum in the face and wear her skin, and see how you feel?
Is there a particular way you would want to encourage readers to be involved?
I'm never going to force things down peoples throats, but just check out the website. I'm sure there will be a lot of things on there that hit home for you.
How would you define social responsibility?
Being true to your beliefs, whilst being able to accept that others may not see things the same way as you. Having said that, there are those things which are universally unacceptable, and that is why so many people join together to make a difference. I believe in power in numbers. I also believe in sticking up for people or things that can’t defend themselves. I think as a world it is our responsibility to make sure things like this don’t happen. If a blind eye is turned to certain issues, we've failed.
Quick list of tattoos/mention artists if you’d like:
Everyone needs to check out two artists, one is ‘Chris Garver’ that many of you will know from Miami Ink, he is unreal! Also one of my favourites ever is a guy called ‘Milosch’, his black and grey is probably the best in the world!
Posted by heidiminx at 6:07 PM

Email ThisBlogThis!Share to TwitterShare to FacebookShare to Pinterest
Labels: Dale Butler, Inked For A Cause, Inked Magazine, Malefice, PETA